The Panel welcomes public participation as part of its review process. You can contact the panel using any of the following methods:

Final Recommendations, Government's Decisions, and SGI's Follow up
Status as of April 2010

Project:
Review, for the Minister Responsible for Crown Investments Corporation, a proposal from the Saskatchewan Auto Fund to: increase vehicle insurance rates by a system average 4.2% to be effective November 1, 2009; and, rebalance insurance rates among the Auto Fund's vehicle rate classes with limits on the maximum increases ranging from 10% to 25% depending on vehicle class.

The Assignment: On May 1, 2009, the Panel was formally engaged via a CIC Minister's Order and Terms of Reference to conduct a review of an application from SGI to rebalance Saskatchewan Auto Fund insurance rates and introduce a system average increase in those rates of 4.2%. The Panel held three public meetings during June 2009 in Regina, Saskatoon and Prince Albert to provide opportunities for the public to hear the details associated with SGI's application and to consider questions and comments from the public concerning the proposed rate and rebalancing changes. The Panel tabled their final report with the Minister Responsible for CIC on August 24, 2009. 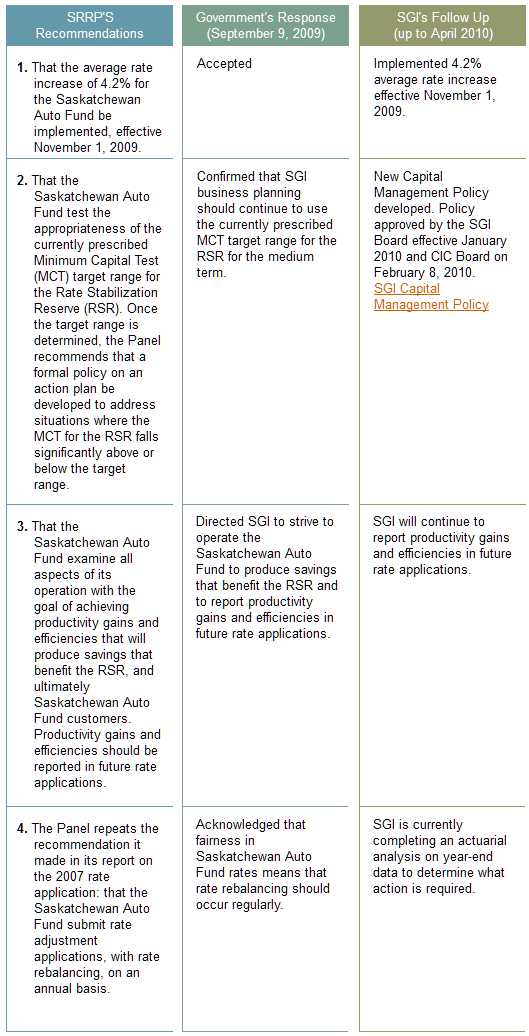